The other morning at church we were doing a “fewer-piece” worship set; I say “we” because it was just me and the piano player, which is a bit unusual for our congregation.  During practice I called back to the sound booth that I couldn’t hear Dan in the stage monitor.  Then I thought to check his mic, and (typical for me) it wasn’t turned on.  It was plugged in, but still not connected to the power source.  Duh.  (We have patient sound people.)

Kind of like attending church, if you think about it.

I’m all about being a part of a local church, whatever that may look like to different assemblies.  Some sit in pews, some under trees.  Some worship with guitars and djembes, some with organs and pianos.  The point has to do with spiritual END_OF_DOCUMENT_TOKEN_TO_BE_REPLACED 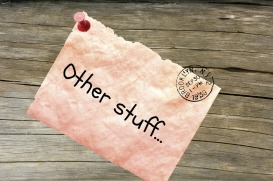 Our house is a hybrid of the do-it-yourself series, This Old House, and the hilarious movie from the 1980’s, The Money Pit.  Never mind that my kitchen is probably from the 1950’s; we are evidently concentrating on the outside for the time being.  At this writing, our fairly large free-standing garage is being resided to match the main house we re-sided not too long ago.  A few months ago we had a friend put in a brand new concrete front walk, which necessarily included two sets of steps (we live on a small slope.)  He’ll be out later for the back steps and the driveway.

Try cooking a Thanksgiving dinner in a 1950’s kitchen.  At least I END_OF_DOCUMENT_TOKEN_TO_BE_REPLACED

Yesterday, Bob and I went on bike ride.  It was beautiful, out in the country, made friends with a couple of dogs (thanks to the treats I always carry.)  It had been awhile since I had been earnestly into biking, so it’s high time to restart.

This morning, however, my left knee disagrees.  Occasionally, it likes to remind me that I’m 30 years beyond 27, and I need to accommodate my activity as such.  Bah-humbug!

Having a wayward part does make my body a bit more challenging.  If I’m going to work up to a full biking club ride, I’m going to have to do some conditioning, for sure.  Thankfully, I’ve got some good help in the END_OF_DOCUMENT_TOKEN_TO_BE_REPLACED

I remember sitting in a school-age Bible class many (and I mean many) years ago learning about this king named Solomon, about all the neat things he did, about how he loved and followed God like his father King David had done, etc, etc.  Neat story, until the teacher told us about how Solomon turned away from God later in life. ..my reaction was something like “What!? No!!”  I was truly disappointed (being the sucker for happy endings that I was and still am).   To put it bluntly, Old Sol liked the ladies—a lot of them.  And as if that didn’t make things complicated enough (which it always does, let’s get real) he started liking non-Israelites also, adding them to his burgeoning harem.

“In Solomon’s old age, they TURNED HIS HEART to worship other gods instead of being completely faithful to the LORD his God, as his father, David, had been…   In this way, Solomon did what was evil in the LORD’s sight; he REFUSED to follow the LORD completely, as his father, David, had done.  On the Mount of Olives, east of Jerusalem, he even built a pagan shrine for Chemosh, the detestable god of Moab, and another for Molech, the detestable god of the Ammonites.   Solomon built such shrines for all his foreign wives to use for burning incense and sacrificing to their gods.  The LORD was very angry with Solomon, for his heart had turned away from the LORD, the God of Israel, WHO HAD APPEARED TO HIM TWICE.   He had warned Solomon specifically about worshiping other gods, but Solomon did not listen to the LORD’s command.”

Thanks for readin’! —dawnlizjones