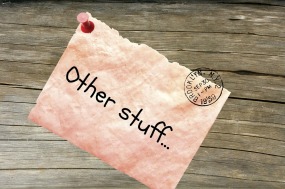 Bob says my head is a scary place to visit.  Truth be told, he does occasionally admit that that’s one of the reasons he married me 35+ years ago.  To this day, he says that I’m “irregular”.  In the common sense, it’s both a blessing…and a curse.

I tried teaching myself logic from an authentically academic book.  Not the term “logic” that is generously used in everyday usage, although that idea harkens back to the true definition, I suppose.  One of the few things I got out of this autodidactic exercise, (besides that fact that I probably wasn’t going to learn this without a qualified teacher…), is that false premises lead to faulty conclusions.  In other words, END_OF_DOCUMENT_TOKEN_TO_BE_REPLACED

To begin with, I haven’t given birth to a baby for over thirty years.  That, in itself, is worthy of thanksgiving.  (And beyond that, if you are a man somewhat faint-of-heart, you might consider going to the next post on your reader…)

Not that I would trade any of it—that miracle of another human being growing within me and then passing through me into the world, and, as my husband’s mother mused when our first was born, someone who is “50% mom, 50% dad, and 100% herself”, well, that’s just unspeakably cool.

Back in the early ‘80s, they were going with these new things called “birthing rooms”: comfortable bed in a wallpapered, home-like atmosphere, etc.  I got to use one when our first made her global debut.  For all the “coaching” classes we had, poor Bob was ultimately relegated to silence and the important task of providing me with ice chips.

For our second, however, the birthing room was not available, and so I was taken into the old standard: an operating room atmosphere with END_OF_DOCUMENT_TOKEN_TO_BE_REPLACED

Anyone who happens to be in my age bracket might recognize that title as the tag line from from a song by the inimitable Paul Simon.  It reads almost like a modern-day psalm of lament, so I wouldn’t recommend it if you’re already having a bad day, but Simon makes a good point in that, although we can influence our situations, ultimately we are not in charge.

Of course, that’s not a popular thought, regardless of one’s faith-affiliation or lack thereof.  We want to be in charge, desperately want it.  Especially when our circumstances threaten to dissolve into further chaos around us unless we “take action”.

King Saul, the first king of Israel, was very much like that.  He was told in no uncertain terms that he was to wait for Samuel, but like many of us, waiting was not his forte.

Oops.  The king had fired up the grill a little too soon.

This was just one in a series of epic fails for Saul’s leadership.  Not that I can boast much better.  It can just be so dang hard to be patient when what I see as “success” is so different from God see’s as success—which is, foremost, OBEDIENCE.  Faithful, patient obedience, which speaks volumes of how much we trust Him for whatever outcome He determines, even if everyone else heads for the door.

In fact, that can be easily become one of the mottos in our decision-making:

Never a good way to lead, and definitely not the way of the cross.  I specifically remember a time as the leader on our church worship team, when God told me to repent (great word) of leading by appeasement.  Make everyone happy as much as possible.  Then try to keep them that way.  Good recipe for a mental health break down, let me tell ya.

Not that we shouldn’t let others share an opinion, offer suggestions, or even voice some serious concerns about potential consequences.  But as one poster once asserted—“The main thing is to keep the main thing the main thing!”

And the main thing is loving my Lord by trusting obedience, leaving the result of that obedience in His hands.  Because as someone once said: God is rarely early, but He’s never late.

I don’t want to fire up the grill too soon before the Main Guest arrives.

I’m not techno-savy, as I’ve mentioned before.   At the same time, I’m not as illiterate in all things computer as I was in the past.  The learning curve is still fairly steep, but I choose my own plateaus here and there along the way.  I have no false aspirations of becoming the “Tim McGee” of my generation.  I mean, after all, I procured this new Macbook thing instead of my old PC, but I did cheat by downloading Microsoft Office onto its little hard drive.

That was my first mistake….

Here may I back up in the story?  I’ve been praying that this whole blogging thing would not become an idol.  Let’s face it, when a few wonderfully generous people (like you) take the time to read and “like” what I write, those feel-good endorphins smother the gray matter and little chemical smiley faces pop up inside my head.  As a Christian, that can go one of two ways.  Either I can END_OF_DOCUMENT_TOKEN_TO_BE_REPLACED

My brother and I come from fairly lanky stock.  Jim hovers around six and a half feet, whereas I am a measly 5’12” (at least it sounds shorter.)  If you’re tall like us, you’ve probably heard the jokes growing up.  You know, “Hey!  Can you hear me up there?”  (To which I reply, “No problem!  Hot air always rises.”)  And so on.  Neither of us were particularly athletic.  I remember my basketball coach saying “Jump, Dawn, JUMP!” Jim’s comment was simply, “That’s the problem; we never have to jump…for anything.”

Even now at my tender age of 50+, being a 6-foot woman in a 5’5”-foot woman’s world is still a bit of a challenge, even humorously so.  Standing in a group of women, I sometimes find myself slouching since the level of conversation lingers about six inches below my ears.  I converse somewhat more comfortably when we’re all seated.

I’m not a very intimidating personality, which is probably END_OF_DOCUMENT_TOKEN_TO_BE_REPLACED 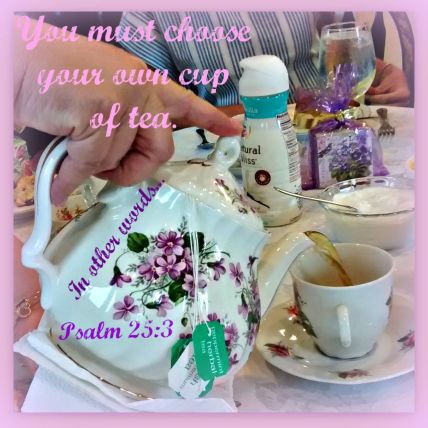 “No one who trusts in you will ever be disgraced,
but disgrace comes to those who try to deceive others.”