Bob’s parents were likewise not investment wizards.  Frugal and responsible, yes, but they were not big names on Wall Street.

However, Bob’s grandfather worked many years for a particular company in which he was able to acquire personal stock.  This “stock” continued to “split” (whatever that means), and through the long time of continued reinvestment, grew somewhat impressively.

To see his grandparents’ home, one wouldn’t think much of their investment strategy, the financial legacy of which was passed down to their two children and was then passed down to Bob and his brothers on the death of his parents.

My (also very frugal) husband has chosen to invest this share, with the intent of not only passing it down to our children, but with the hopes to adding to it for them as well.

Which means our newest car is still an ’04…

Nevertheless, we both have and continue to realize the benefits of a financial inheritance in ways we’re probably not even aware of to this day, including while growing up.  Likewise, we have both been reaping the even more important benefits of a spiritual legacy passed down to us through both of our families.

“The priests will not have any property or possession of land, for I alone am their special possession.”

What a countercultural statement for back in the day!  Land acquisition was all that!  Property was your security, your status, and a major part of the financial legacy to hand down to your family.  What I hear God saying here is that knowing Him is a far more necessary and sufficient inheritance than anything else.  Then this:

“I sent you to harvest where you didn’t plant; others had already done the work, and now you will get to gather the harvest.”

Jesus is talking here about a kingdom harvest of souls for God, but I’m thinking the principle applies to the spiritual pass-down in our lives as well.  And what do I do with it?  I can squander the spiritual and physical resources I have, which are largely due to blessings of our parents’ godly obedience.  Or I can invest them for further growth (the dividends of which never fluctuate with the cultural moral tide) to be passed down to my children and beyond.

My own dear parents have discussed with us some investments which they someday intend to leave with “no strings attached”.  In my usual levity I quipped something like,

“So, you mean I can go buy that bright red Ferrari?”

“Well, if that’s how you want to use it,” was the sincere reply.

(For some practical and encouraging info on passing down the spiritual blessing to your children, you might find this interesting:) 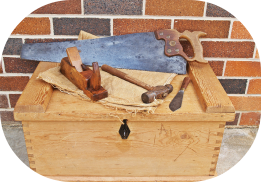 My dad had a shop in the basement, a couple of rooms of the basement in fact. It was pretty awe-inspiring.  His big engineer’s drafting table, from which hung the triangle and T-square, dominated one room, the one in which he built in all the new cabinets himself.  I think that was before he designed and built the beautiful screened-in back porch.

The actual shop was in an adjacent room.  This housed a myriad of baby food jars filled with screws and washers and all types and sizes of things.  His lathe was in there, and the circle saw, and undoubtedly a host of other things I would have no idea how to use.  (What’s a router??)

END_OF_DOCUMENT_TOKEN_TO_BE_REPLACED

I had no idea how much my middle adult daughter loves jigsaw puzzles!  We rarely did any when she was growing up, just not my thing, you know.  She says it’s a stress buster, and just plain fun.

Now that I know this little tidbit of info this one who lives half a continent away, I’ve decided to give her a year-long birthday present of a puzzle a month.  Only with a little twist: Bob and I will build the puzzle first, turning it over when completed and writing a message on the back.

But wait, there’s more.  I’ve sent out an APB to family to get them involved.  Now, when the hub and I finish a puzzle, I (carefully) wrap it up and mail it to different family members for THEM to write/color/draw on the back, send it back to me (postage pre-paid) and then I break it up and send it off to its new coastal home.

Okay, yeah, this is getting expensive.  Hopefully I’ll have some ready and rolled up when we travel to actually be with family and get a few done in advance that way.  It’ll be worth it though, helping my middle child connect with family in a unique way, dontchaknow?! END_OF_DOCUMENT_TOKEN_TO_BE_REPLACED

The words of the wise are like prodding goads, and firmly fixed [in the mind] like nails are the collected sayings which are given [as proceeding] from one Shepherd.

When people say, “life is a journey”, they’ve obviously never been on family vacations.  Or maybe that’s where the analogy originated!

If you’ve ever traveled with children, (that’s children, plural), you are experienced in a challenge unknown and unappreciated by your adult counterparts.  This was particularly true in the days prior to the techno-burst of unlimited data on tablets to keep the little balls of energy wirelessly entertained while they are strapped for hours in a seatbelt.

Of course they don’t like the seatbelt!  Nevertheless, it’s your responsibility to get them wherever in one piece, despite the potential assault on your own sanity.

“Jimmy has his elbow in my space!”

“Beatrice say she has to go to the bathroom!”

Triple-A should have an app.

So, when the Old Testament priest named Ezra undertook the monumental task of transporting men, women, and children, plus a hoard of silver and gold, back to Jerusalem after the 70-year exile, no wonder he prayed…a lot. END_OF_DOCUMENT_TOKEN_TO_BE_REPLACED

My dear father-in-law was beautifully British.  I remember seeing a castle just sitting out in the field one time while visiting and driving through the Anglican countryside.  Now there’s a site you don’t see amidst the corn in Midwest rural America!

Quite a different lifestyle, that was.  It conjures up pictures of courtiers and knights and princesses tucked away in gabled towers.  Here comes the enemy, so just pull up the drawbridge, and release the alligators into the moat.  How convenient would that be when the IRS comes lurking about? END_OF_DOCUMENT_TOKEN_TO_BE_REPLACED

It’s that time of year when the grocery stores are stocking up on their 20+ pound turkeys.  I’ve already cooked up one and stored most of it in the freezer.  We usually head back to Indiana for Thanksgiving with family, and my sister-in-law puts on the feast of the year.  It’s one of those meals where you have to pace yourself, especially if you want that pumpkin pie (with R-E-A-L whipped cream) at the end of the day.

It tends to be the typical “your eyes are too big for your stomach”, so it’s a learning process I suppose. END_OF_DOCUMENT_TOKEN_TO_BE_REPLACED

This past summer Bob and I enjoyed visiting my parents in their beautiful Midwest retirement community—it’s like a college campus for the over-60 crowd.  They’re incredible!  Interestingly, we were also roaming around the California Redwood Forest just few weeks prior to that, and in my mind, there is a striking resemblance between the two in more ways than one, if you get my drift.

Now a retired engineer, Dad is a United States Navy veteran who worked as a mechanic on airplanes, and his stories keep me spellbound.  While we were visiting, a neighbor stopped in.  Mr. B is a 90+-year-old U.S.A.F. bomber pilot vet from World War II.  (Triple exclamation marks…!!!) END_OF_DOCUMENT_TOKEN_TO_BE_REPLACED

My house is not a clean house.

Well, I mean it’s hygienic.  We have indoor plumbing and clean water, which, for context and perspective, is more than can be said for most of the planet.

It’s just that, as Bob says, “my girl is a messy girl”.  Truth.  I really had to acknowledge that when all the girls moved away and the empty nest didn’t really reorder itself.  Nope.

Just too many books to read, too many posts too write, gardening, projects, and then there’s this thing called a full-time job.  And a husband.  (They take time, too.  Well worth it.  And he’s the clean one of the duo.)

So I find at least some solace in this:

“Without oxen a stable stays clean, but you need a strong ox for a large harvest.”

Not that I consider myself a strong ox, although Bob says that I “come from good stock”, whatever that’s supposed to mean.  (He also says, however, that I can “work him under the table”.)

I think it’s probably also easier in parenting, for instance, to take a DIY attitude rather than let the kids learn by doing, because of the potential/probable mess, which makes more work for yours truly (which may or may not get done, see above disclaimer.)

Extrapolate: it’s likewise easier (translate “safer”) to not care so much, try so much, dream so much, reach out so much in this otherwise hostile world we live in this side of eternity.  It gets harsh, uncomfortable….messy.

This citation will probably put me over my word count, but it’s worth the read:

“It is not the critic who counts; not the man who points out how the strong man stumbles, or where the doer of deeds could have done them better. The credit belongs to the man who is actually in the arena, whose face is marred by dust and sweat and blood; who strives valiantly; who errs, who comes short again and again, because there is no effort without error and shortcoming; but who does actually strive to do the deeds; who knows great enthusiasms, the great devotions; who spends himself in a worthy cause; who at the best knows in the end the triumph of high achievement, and who at the worst, if he fails, at least fails while daring greatly, so that his place shall never be with those cold and timid souls who neither know victory nor defeat.” –Theodore Roosevelt

I have not a clue whether or not good ole’ Teddy would have made it into the White House in today’s climate, but I sure do like this quote.  And if ever there was an ox in a Washington china shop (other than, of course, now) it was Teddy.

Several years ago, I read a study synopsis from a well respected site indicating that the most influential power in a child’s life was his parents. (Golly-gee-whiz, I wonder how many man-hours and tax dollars went into that one.)  Of course, ask any of the teachers in my middle school, and they could have told you that.  Better yet, I have a Book that pretty well spells it out from years of experience and Wisdom.

Needless to say, there are some forces in the Universe that are inherently powerful, for good or evil, and parenthood is certainly at the top of that list.  It’s not that parents can take credit for all the choice their kids make (positive or negative), but their influence is still credibly incredible in some capacity throughout a person’s life.

So it takes some real courage when a child, even an adult “child”, has to back up and re-evaluate patterns of thinking and doing that END_OF_DOCUMENT_TOKEN_TO_BE_REPLACED