My husband’s nickname is Goose (and variations thereof).  As the story goes, some of his high school basketball teammates knighted him with that moniker, lo, these many years past, and it stuck like glue—even with his own family.  Rarely do I hear anyone refer to him as “Bob” when around his brothers.  Or old friends.  Even his mom and dad called affectionately called him adopted the name for their first born!

Nicknames, like reputations (at least negative ones), can be quite tenacious.  Just ask the Apostle Thomas.  First word that END_OF_DOCUMENT_TOKEN_TO_BE_REPLACED

If Truth in Palmyra thinks he can throw down the gauntlet and get away with it, then I’m in!  (And I hope, if you’re reading this, you are also!)

Here’s the meme he posted: 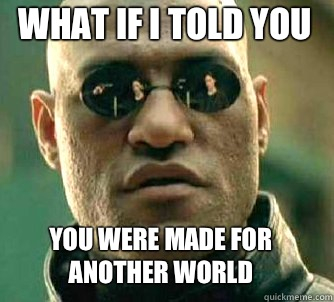 “How would I live now if I really embrace fully this concept? What would be different about my responses and concerns?”

Followed by his invitation of:

“That’s a good question…what’s the answer? You first.”

Here’s some beginning thoughts, but perhaps you might add a few more?  I have referenced a several blogs specifically, but anyone can play, as long as we all play nice. (Actually, all Christians could use some insight on this one, so comments are welcomed and solicited.)

Okay I guess that three cents instead of two.  And perhaps I should stop, since I’m delving a bit deeper into the Superman analogy (that’s my husband’s blog…)  But when you think of it, that’s what we are called to be, in a sense, naturally not of our own

power but by the supernatural power from an Other-Worldly Source.

Call-outs to all, including but not limited to:

AND LAST, BUT CERTAINLY NOT LEAST!!

And blessings to all.  –dawnlizjones

As I write this, I’m sitting on my patio in the cool of the early morning springtime watching a mommy robin feed squiggly brown disgusting things to the little ones in her nest, which she decided to make in a hanging basket outside my back door.  When I think of what we used to have for our young’uns to eat back in the 80’s (strained peas and carrots???), I guess to each his own.

Now she’s taking a bit of a break, just sitting on the babes keeping them warm.  Not that moms ever really take a break—yep, there she goes again, off to get more disgusting brown squiggly things. 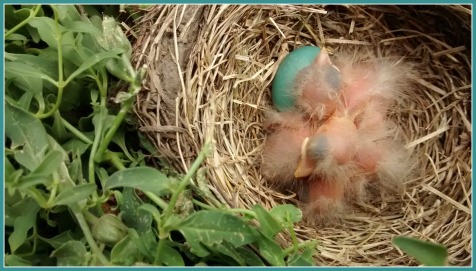 Earlier, we had a little drama.  There must have been another robin invading the nearby territory as mom and/or dad went on the offensive.  There was a brief but END_OF_DOCUMENT_TOKEN_TO_BE_REPLACED