I love, LOVE to hear my dad’s stories about then he was in Navy!  Back when Bill Haley and his Comets were getting ready to Rock Around the Clock, Dad was off overseas on some semi-covert operation, serving his country, doing the things that Uncle Sam thinks invincible 19-year-olds can do.

I’m thinking that, at the time of Dad’s tour, we weren’t technically at war with anyone, but we all know what that means.  Realistically, we’re always at war with someone, even if it’s under the radar, especially to those of us back home.  There are always enemies, and it behooves us to keep some operations covert, I suppose.

A prime example of this is Joshua and the conquest of Jericho.  With help of the Expositor’s Commentary, I find some interesting parallels—

The Israelites had not yet encountered a walled city like Jericho; this had to be intimidating to the roaming former Egyptian slaves. What new situations do I come up against that threaten my comfort zone?

Concerning the land, God told them, “I have given to you…” meaning it was already a done deal, but here’s the thing—they still had to fight for it. Yes, they had their priests (worship), but they also had their warriors (spiritual warfare).  As an example, my children are “a heritage of the Lord”, they are part of my “land”.  As such, I must fight for them as God gives me wisdom, but fight for them from the place of secured victory, not fear or anxiety.

Joshua’s situation was a “religious event”: “…the presence of priests, and the prominence of the ark all indicate that the conquest of Jericho was more than a military campaign; it was a religious event. Israel must always remember that the land was God’s gift to them.”  My circumstances aren’t merely about me either; it’s ultimately about God, His plan for eternity, His kingdom.

Praise and declaration come before the victory. The priests were very conspicuous in this procession, and they were also the ones sounding the trumpets.  These can represent both praise to God and the sound of war.  As God’s “royal priesthood”, we are to be involved in both; in fact, they are inextricably linked.  Walking around that wall for six days was an act of obedient faith—so is praise and worship.

God gave the people specific instructions that were not part of the normal battle plan of the day. Can you imagine Joshua’s mighty commanders when they received their orders?  (“You want us to do what??”) Not unlike the family of Noah who had never heard of rain, or even the disciples of Jesus who couldn’t fathom their King nailed to a cross, God has ways of doing things that can be off the wall.  To borrow from the secular: “Just do it.”

The commentary also brings out the tedium of continued marching for six days. This was not a stroll in the park.  They were in enemy territory, so there may have been arrows (and who knows what else—ewww!) flying from the walls.  Sometimes my obediently praying and obstinately living God’s plan for my life becomes tiring.  But God says I am not to grow weary in doing good.  Again, from the commentary, “This senseless marching may have completely demoralized the defenders, who would have been totally confused about what was going on.” I can bank on it: persistent prayer and praise demoralizes my Enemy.  (I rather like that one.)

“Suddenly, the walls of Jericho collapsed, and the Israelites charged straight into the town and captured it.” 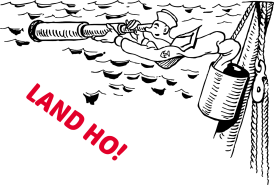 My dad was a sailor, and we love to hear him tell his stories about when he was not quite into his twenties wearing that white “dixie cup”, old photos and all!  Fast forward about 20 years, and I also love the story about when he and my soon-to-be stepmother were dating:

Dad had taken this nice woman for a fun day of sailing on our little Sunfish, when I get a call from Dad saying that the sailboat had caught the wind and had capsized, both he and Jane had been dumped into the cold water, and he had lost his keys (as well as his glasses) in the lake.  Jane’s son (the only one of us kids who had a driver’s license at the time) was coming by to pick up an extra set of keys, and would I please get those ready for him???

(In Dad’s defense, his stint in the navy didn’t include sailing anything.  He worked on airplanes and END_OF_DOCUMENT_TOKEN_TO_BE_REPLACED