One of Bob’s brothers was a army paratrooper out of Fort Bragg.  He then went on to get his M.Div. from Fuller in California.  So somewhere along the way he was dubbed “the warrior priest”.  (We still have a couple of his army jackets—your tax dollars at work…)

Evidently, English is not an easy second language to learn, but Richie mentioned how difficult it was to learn Greek and Hebrew.  I can only imagine the hours he spent at a desk pouring over books and notes.  It had to be an intentional positioning of his body and mind to make sense of all those squiggly marks!

So I have an increased respect for those who delve into the classic languages, and those who have sacrificed much more than time to bring us the Bible in our own tongue.  Through the years, even I have picked up a few words here and there. I have a sweet 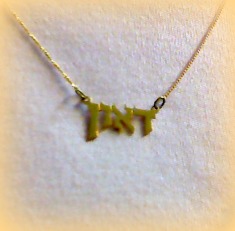 gold necklace that Bob’s mom brought back to me from a visit to Israel that is my name in Hebrew.  (At least, that’s what she was told; for all I know it could say “go home, Yankee pig”, but that’s beside the point.)  Years ago, I END_OF_DOCUMENT_TOKEN_TO_BE_REPLACED