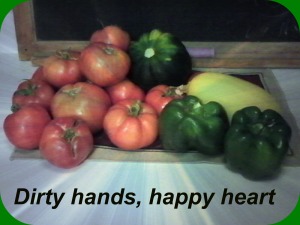 I put in this new garden two years ago, by hand, meaning without much help except for the big farm and home truck that dropped everything off next to the driveway.  And let me tell ya, those railroad ties are heavy!  (I think Bob helped me with one of them, but he had previously hurt his back, so I sent him back indoors.)

It’s been beautiful and fruitful:

But now, a few seasons later, the dirt seems to have settled and is getting a bit low.  I’m always asking Bob for dirt for my birthday, or Mothers’ Day, but his romantic heart can’t bear showering dirt on his wife when other wives are asking for jewelry or flowers.

So, rather than spending tons of funds on the bags of stuff that reportedly makes things grow miraculously, I sought out a possible alternative.

This is what happens when you know one of the Ag teachers at the high school:

My old Suburban and I were both feeling the aftermath the next day.  The Sub needs a good vacuum and I need some more ibuprofen.

Nevertheless, I have several more inches of good soil—already premixed with fertilizer, thanks to the cows—and an invitation to come out for more.  In practical terms, my friend has an inexhaustible and highly sustainable supply.

All this to say I’m learning that even soil gets tired, packed down, depleted of nutrients. For a good gardener, tending the soil isn’t just a one-and-done; on the contrary, it’s foundational to productive growth.  It takes considerable time, sustained effort, (and occasional ibuprofen, since I’m out of shape!).  It also takes community, creatively reaching out to resources, asking questions, and plenty of personal sweat-equity and dirty hands.

Which isn’t much different than my spiritual life, come to think of it.

I’m called to produce good fruit for God’s kingdom, true, but I can only harvest to the level I have tended my own soil.  This is not selfish, not slacking, but crucial maintenance, investing in my own foundation for greater productivity.  After all, Jesus didn’t consider spiritual productivity an option; it’s an assignment—

“You didn’t choose me. I chose you. I appointed you to go and produce lasting fruit,…”

Such an attitude doesn’t simply refer to my unobstructed time with God alone, but also taking care of my physical body, nurturing my close relationships, defining just what are my personal talents and personality traits.  In reality, that’s ALL “God’s stuff” as well, and without proper attention, it all becomes tired, packed down, and depleted.  Fruit begins to wilt.

And wilted fruit doesn’t look all that inviting, nor is it particularly tasty.

Interestingly, there seems to be a connection between bearing God’s intended spiritual quality (fruit) and God’s abundance:

“…so that the Father will give you whatever you ask for, using my name.”

In practical terms, God distinctly told me that the best thing I can do for [insert your own loved ones] is to drawer closer to the Almighty myself.  Again, breaking up my own soil so that I don’t sow among thorns, (Jeremiah 4:3), isn’t a mere suggestion.  There are conditions of my own heart, both helpful and otherwise, that He is in the process of weeding or fertilizing to increase productivity (as He defines it productivity, that is.)  And like the cattleman, my God has an inexhaustible supply of available resources to do just that.

Shovel in hand, I hope to get some gardening done today also.  Better check the bottle of ibuprofen.