I’ve really been having fun developing my crocheting prowess.  I don’t use patterns, I just kind of wing it.  Recently, my oldest daughter challenged me to expand into the stuffed toy market and try my hand at a few from my preschool granddaughter’s favorite Netflix show.

Thankfully, preschoolers are very forgiving when it comes to details… 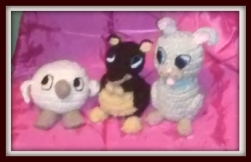 Naturally, there are all the knots and threads that you can’t really see from underneath.  My granddaughter wouldn’t recognize the face of her fuzzy friends if she saw them from the flip side, but that side is necessary to hold the whole creation together so it doesn’t unravel!

I wonder if that was happening in King Hezekiah’s life at this point in his history—(unraveling, that is, not crocheting…)

“In this way, King Hezekiah handled the distribution throughout all Judah, doing what was pleasing and good in the sight of the Lord his God.  In all that he did in the service of the Temple of God and in his efforts to follow God’s laws and commands, Hezekiah sought his God wholeheartedly. As a result, he was very successful.”

The backstory here is a brief history of Hezekiah’s massive reforms throughout the kingdom of Judah, which even included much of the sister-kingdom of Israel.  He was going completely counter to his most recent relatives, so I’m sure some royal toes got stepped on.

It’s unfortunate that the folks who, centuries later, added the chapter and verse divisions ended the chapter here.  We tend to stop reading at the period of verse twenty, when actually a critical plot twist takes place in verse one of the next chapter:

“After Hezekiah had faithfully carried out this work, King Sennacherib of Assyria invaded Judah. He laid siege to the fortified towns, giving orders for his army to break through their walls.”

My American mind doesn’t like that part.  You mean, I can “do” everything right and still have problems?!?  You mean the story of Job isn’t just a one-off?

I’m also all about understanding the cause/effect relationship connected with our decisions.  Certainly, one of the (unfortunately diminishing) hallmarks of maturity is recognizing that my actions have consequences.

Taking these two concepts a bit further by combining them—consequences related to my decisions with God AND the resulting material blessing from that relationship—poses some important challenges.  Not unlike for Job’s erstwhile friends.

Then I consider Jesus, Who really did “do” everything right, of Whom God said “this is My Son in Whom I am well pleased” and all that.  And, yes, even though His cross was planned for my redemption, He didn’t exactly live a cushioned lifestyle prior to that.

Or Paul, who’s list of experiences summarily did NOT include a vacation in Cancun.

The point is that, in the scheme of eternal events, there are things that happen which are beyond my wisdom to figure out.  I may want to blame someone’s hidden sin for what they may be currently going through, or blame God for my own present concerns (which is a spiritually lazy cop out, BTW.)

In reality, there are just too many threads and knots, and all I’m seeing is the mess from the inside to comprehend the finished project.  Some projects will only be fully recognized, some mysteries will only be explained, when we “see face to face”.

Just maybe God is making something beautiful in me, threads, knots and all, for others to see on the outside.

3 thoughts on “In the interest of threads and knots”