Here’s a progression of leadership that I find interesting, not that you have to be recognized “leader” in this sense to make the lessons noteworthy.  This is, however, a true countercultural mindset that I personally find very informative and challenging.

And David realized that the LORD had confirmed him as king over Israel and had greatly blessed his kingdom for the sake of his people Israel.

In other words, one of the main reasons God blesses me is for the sake of His people.  (Wait…you mean it’s not about me??)

When the Philistines heard that David had been anointed king over all Israel, they mobilized all their forces to capture him. But David was told they were coming…

Secondly, God’s anointing on me will be attacked, because the kingdom of darkness does not fancy it.  This anointing includes gifts, talents, even (sometimes difficult) personality traits.

I like how David didn’t just assume to take matters into his own hands.  He saw the attack, rightly perceived it as such, but FIRST brought the matter to the Lord for instructions.

So David and his troops went up…and defeated the Philistines there.

There was definite sweat-equity involved here, maybe even no small amount of blood.  One of the “anointings” with which God had blessed David was his being a truly courageous warrior.  David used his full anointing/gift/talent to affect the proper outcome, and then…

“God did it!” David exclaimed. “He used me to burst through my enemies like a raging flood!”

…David makes a public declaration by giving credit where credit was due.  No spotlight on himself; nope, he knew where the true victory had come from!

The Philistines had abandoned their gods there, so David gave orders to burn them.

Why leave junk laying around that could tempt anyone (including me) from unadulterated obedience to the one true God?

Take all this story and apply it to our true enemy, the spiritual powers of darkness.

When we acknowledge God’s blessings as a service to His people, and recognize His blessings also come in the form of anointing/gifts/talents, Satan gets more than nervous, because we begin to see the power in what God has put inside of us, and why it’s there.

That means we become a target: whereas God see us through the blood of His Son, Satan only sees us through his own crosshairs.

No problem, since like He did for David, God has already forewarned us of the enemy’s attack.  It is still critical, however, to ask God for guidance before proceeding.  God could have told David to retreat, or to sit and watch while the Almighty did His own thing.  Always happy to prevent unnecessary bloodshed on my part…

When the battle is won, and it will be, I must always give God the credit.  No matter what scars I have incurred or what accolades and medals others may want to pin on me, it’s all about Him. 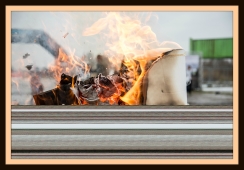 6 thoughts on “Don’t forget the trash”