One indisputable characteristic about the Old Testament prophets—they were weird.  I don’t say that disparagingly, but c’mon, they were not always the kind of people you’d invite to a office picnic.  Calling down fire from heaven, tying themselves in knots, and all that.

Of course, they were good to have around when something needed fixed.

Case in point, the prophet Elisha has been persuaded to come with some of his students to build a new meeting place.  In the course of events, there was a problem:

“When they arrived at the Jordan, they began cutting down trees. But as one of them was cutting a tree, his ax head fell into the river. ‘Oh, sir!’ he cried. ‘It was a borrowed ax!’

‘Where did it fall?’ the man of God asked. When he showed him the place, Elisha cut a stick and threw it into the water at that spot. Then the ax head floated to the surface. ‘Grab it,’ Elisha said.

And the man reached out and grabbed it.”

Interestingly, God made the submerged tool float, not fly.  In other words, there was some personal action involved on the part of the student.  Don’t think for a minute that the guy didn’t get wet retrieving his miraculously appearing ax head, after which he had to fix it back onto the ax handle.

By contrast, the attitude I see so much in my culture today is that we want things handed to us without personal inconvenience, much less (gasp!) sacrifice.  Even as Christians, we are prone to ask God for His intervention, but when it comes, (and it does), we don’t see it as such since it doesn’t fit our expectations.  Too much work involved.  I’ll wait for something better.

When, in fact, the something better is not necessarily something easier.  Examples include opting out of a marriage simply because my feelings have changed, leaving a church fellowship because of a personal offense, or (here’s a biggie) walking away from God…for any reason.

And the river is wet and cold.  And I have to fix the tool before I can get back to the work I was doing.  My sacrificial involvement is actually a significant part in the help He provides.  By design, I’m part of the process.

That process is called growing up.

“This will continue until we all come to such unity in our faith and knowledge of God’s Son that we will be mature in the Lord, measuring up to the full and complete standard of Christ.” 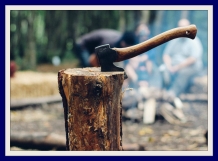 …with the other adults.

10 thoughts on “Getting back to work”