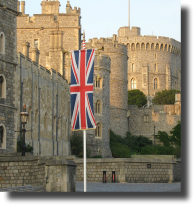 Bob has been a little concerned about my hearing.  Of course, when it comes to watching our beloved British shows on TV, we both have to turn up the volume, if you get my drift.  Our very entrenched Midwest American minds don’t always pick up the subtleties of our Anglo-neighbors, and we end up asking each other—

Neither of us want to miss any of the important plot developments for lack of communication, y’know.

Which is absolutely what could have happened here, but thankfully somebody was listening closely:

“When he heard that Jesus had come from Judea to Galilee, he went and begged Jesus to come to Capernaum…”

This guy had a problem.  Now, I’ve leaned that there is a difference between a mere inconvenience, and a true problem.  It’s not like his event speaker cancelled at the last minute and he needed a replacement.  No, he was needing Jesus…

That’s a problem.  Interesting, Jesus’ answer doesn’t quite fit our typical Sunday School image of the Christ holding a lamb:

“Jesus asked, ‘Will you never believe in me unless you see miraculous signs and wonders?’”

Huh?  There seems to be a disconnect here between the father’s urgent request and Jesus’ initial response to that request.  I would think that asking Jesus for a miracle to heal his little boy would show that the boy’s father already believed in this Messiah.

Where one translation says “begged”, another says “implored”.  This was not a casual “hey, if you’ve got a minute…”

I love how the man counters Jesus’ question:

Undaunted, persistent faith.  Just like the Gentile woman pleading to Him for her son’s life.  A test, not a tease.  A reinforcement, not a rebuke.

“Then Jesus told him, ‘Go back home. Your son will live!’ And the man believed what Jesus said and started home.

While the man was on his way, some of his servants met him with the news that his son was alive and well. He asked them when the boy had begun to get better, and they replied, ‘Yesterday afternoon at one o’clock his fever suddenly disappeared!’ Then the father realized that that was the very time Jesus had told him, ‘Your son will live.’ And he and his entire household believed in Jesus.”

Not that Jesus ever turns down even a seed of faith,

…or a bruised reed or a smoldering wick.

In fact, whatever He finds in the way of faith is so precious that He is willing to make Himself “look bad” in the effort to stretch that faith to a higher level.  This father was read-my-lips focused, not so much on what Jesus was saying, but who He was.

Similarly, I have a need to turn up the volume, a need to understand what God says in the light of His revealed character.  Because if I’m not listening carefully, I’ll miss His important plot twists.