Why am I always rooting for the underdog?  I love David and Goliath stories, and how the tables are turned on the bullies, whether that bully comes in the form of a person or an attitude.  Like this one:

“Soon a Samaritan woman came to draw water, and Jesus said to her, ‘Please give me a drink.’”

The woman was astounded!  (So were His disciples when they returned and saw this discussion taking place.)  Not only was Jesus, they revered teacher, talking to (gasp) a woman, but (double gasp) a Samaritan.  Then, of course, add to that her personal station in life (divorced four times and currently co-habiting), well golly!  That’s three strikes, you’re out!

Which, as we know now, is God’s specialty.

I love to contrast this account with the handling of the previous few posts about the poor woman in the the story of Judges 19.  I won’t go into the gruesome details, but needless to say that the guys in the Old Testament (and the New, for that matter, until Jesus came) didn’t get it right about God’s view of women.

Just a few sentences into the present conversation:

“Jesus replied, ‘If you only knew the gift God has for you and who you are speaking to, you would ask me, and I would give you living water.’”

We begin to see the dignity and worth of the feminine side of God’s creation.  Jesus is bold in His affirmation, but He is also uncompromising in His message of her need to His living water, as well as (here’s where most of us jump ship)…a change of lifestyle.  Jesus desperately wants to give this precious gift to her.  It starts here:

“‘Go and get your husband,’ Jesus told her.”

BAMM!  Confrontation.  Truth.  But there is no authentic love where there is compromised truth.

No condemnation, just facts.  He actually puts a positive spin on this by saying she spoke the truth, albeit not the whole truth.  I love how Jesus fills in our purposeful omissions.  We all do it.  It’s just so easy to rationalize, justify, and “well, but…” our way out of personal responsibility before God.

“‘Sir,’ the woman said, ‘you must be a prophet. So tell me, why is it that you Jews insist that Jerusalem is the only place of worship, while we Samaritans claim it is here at Mount Gerizim, where our ancestors worshiped?’”

We’re really quite good at that also, which it seems she was doing here.  This conversation was getting more than a little too close for comfort, lets make it nice and theological (which shows she had some religious education) and keep this Man at arm’s length.

After a little more conversation, during which Jesus masterfully returns to the subject at hand, i.e., her soul:

Considering the concept of Biblical feminism, I find it interesting that, evidently (and I’m willing to stand corrected) the first person Jesus point blank revealed His true identity to was this (a) socially ostracized and immoral, (b) Samaritan, (c) woman.

“Many Samaritans from the village believed in Jesus because the woman had said, ‘He told me everything I ever did!’  When they came out to see him, they begged him to stay in their village. So he stayed for two days, long enough for many more to hear his message and believe.  Then they said to the woman, ‘Now we believe, not just because of what you told us, but because we have heard him ourselves. Now we know that he is indeed the Savior of the world.’” 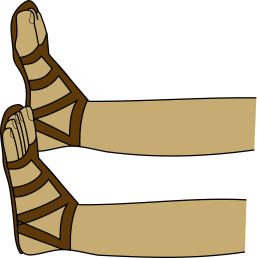 And another Goliath bites the dust.