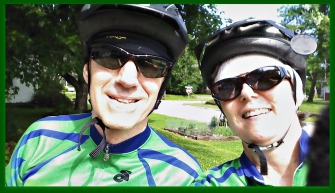 As summer break was drawing to a close, Bob asked me to go on a “rocket ride” with him.  When your husband of almost 38 years asked you on a date, the appropriate answer is “YES!”.

Part of our retirement planning the past several years has been to purchase several good bicycles.  I say several, since they are used for different purposes: on-road, off-road, and then I have one just for errands and groceries (I call it my “town-bike”).

I’m somewhat disappointed to admit that the muscles and joints are not quite what they used to be, readily complaining, and preferring my great-grandmother’s rocking chair to the hard saddle of my Specialized Allez.  Of course, padded spandex comes in handy.  Bob says there are two fashion rules for wearing spandex:

Off we go, but almost immediately the quads start groaning, and I think, “sheesh, am I really that badly out of shape?!?”

Rewind a couple of millennia to ten very sick guys standing apart from everybody else, and trying to get Jesus’ attention, hoping for a miracle:

“As Jesus continued on toward Jerusalem, he reached the border between Galilee and Samaria.  As he entered a village there, ten lepers stood at a distance, crying out, ‘Jesus, Master, have mercy on us!’ He looked at them and said, ‘Go show yourselves to the priests.’”

What? You were only supposed to do that when you were healed. Evidently, looking at each other, they still only saw their white, diseased skin, but they obeyed anyway, because…

“And as they went, they were cleansed of their leprosy.”

AS THEY WENT. That’s what gets my attention.  Not as they were standing in the presence of God’s Son.  Not at the moment when they asked (i.e., in their personally suggested time frame).

The answer to their prayer was not manifested until they obeyed.  In other words—

The courage I pray for might not be there until I open my mouth to say what needs to be said.

The wisdom I pray for might not show up until I choose to relax and listen for God’s next step.

The provision I pray for might be waiting for me to give away something God has told me donate.

Sometimes (many times?)  we participate in God answering our prayers, just like I participate in my bicycle’s health benefits.  After a mile or so, the leg muscles warmed up and it turned out to be surprisingly good ride!  But not until I was “in the process” of riding.

Just wish the seats were a bit better.  (Go, spandex!)