A gruesome site greeted me when tending the garden after being gone for a week of family vacation.  Sure, there were the typical weeds and such, no big deal, just hands and knees stuff.  But what gave me a drop-shoulder-roll-eyes kind of pause was the leftover feathered carcass of a bird that had obviously been trying to pilfer my blackberries, but had gotten entangled in the netting.

Not a pretty site.  Not a happy ending.  (I will spare any readers a photo.)  I mean, he was, after all, just trying to get something to eat, doing what birds do naturally.  It’s 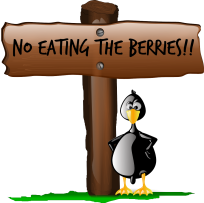 not like I could put up a “No Trespassing” sign, although my dad suggested I could hang up some brightly colored ribbons.  That could help them at least see the netting, but the berries are just so inviting, I’m not sure it would divert them enough.

The thing of it is, I really R-E-A-L-L-Y like birds.  I have multiple birdfeeders up in my yard for cryin’ out loud!  I let them nest wherever they want (even in my hanging baskets and in my garage!)  So there just seems something amiss with having a natural attraction that is likewise killing them….

…because of something I’ve added.

Boy howdy, now that thought could go in several directions, so I’ll take it in this one:

“What sorrow awaits you teachers of religious law and you Pharisees. Hypocrites! For you shut the door of the Kingdom of Heaven in people’s faces. You won’t go in yourselves, and you don’t let others enter either… and then you turn that person into twice the child of hell you yourselves are!”

(Clearly, Jesus had His own definition of “cultural tolerance”.)

The Good News about Jesus is really good news; it’s sweet and juicy and very, very attractive.  It took a very long time, God’s timing in fact, to ripen on the Vine, but when it did, and the people were wanting it, guess what–the nets went up.  And they still do today, (here’s just a brief list):

I’m going to have to deal with my berry net and come up with a good solution.  I just don’t want anymore little lost birds.

After all, He knows every sparrow….