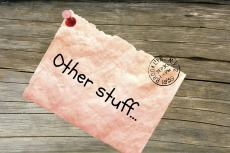 This week I had my last “first” day of the kiddos returning to school.  As if that isn’t enough to make a school nurse’s hair stand on end, add to it that I work at public middle school, where hormones run rampant and drama is just a part of life.  Everything from “do you have any Super Glue for my broken [plastic, garishly painted, glamor] fingernail” to where-did-I-put-my-multi-page-child-abuse-form,…it tends to land in my office.

I have a well-worn path to the Counseling Center, (not always just for the students, mind you.)  God bless them…lots.

I plan to retire after this year, as will my husband, who is also in education.  That does not, however, mean that drama disappears from one’s life.  Sitting out there on my patio that morning (before the onslaught) I was ticking off my own current personal list.  We all have ‘em.

Then I heard some joggers go by out front in the dark cool of the morning hours, chattering to each other as they ran (I wish).  And there was an occasional drip from the beautiful rain we had had the night before, and somewhere in the not-so-far distance (I live in a rural small town) a rooster decided to wake up everyone.

I realized that God must have decided to keep this old planet spinning for another day, and me on it, for a reason.  He must have a plan, sees something (okay, many things) that I don’t.

Then I read this:

“You rule the oceans. You subdue their storm-tossed waves. You crushed the great sea monster.[*]  You scattered your enemies with your mighty arm.”

“Hebrew Rahab, the name of a mythical sea monster that represents chaos in ancient literature.”

Chaos.  That pretty well sums it up sometimes.  Many times. And not just merely in terms of the first day of school.  Life itself can appear as this toothy monster that’s has one thing on its mind—a piece of me.

I find it interesting, then, that Jesus picked walking on the water as one of His defining miracles:

“Meanwhile, the disciples were in trouble far away from land, for a strong wind had risen, and they were fighting heavy waves. About three o’clock in the morning  Jesus came toward them, walking on the water.”

I serve the Man who not only calmed the raging water, but also walked on it, by choice—while it was still raging.  Impressive.

Not only was Jesus making a statement about His divinity by linking His action to an Old Testament psalm, (as if walking on water wasn’t enough of a statement!); He was also making a clear invitation—

You got waves?  I’ve got the ability to help you walk on them.  You got a sea monster?  I can crush him for you.

In other words, He specializes in chaos.

It’s what He formed this old world from, after all.

(BTW, if you’re still interested in sea monsters, here’s a fun one you might enjoy called The Kraken. But to get the really cool illustrations, you’ll have to purchase the book!)