We had some funnies while visiting our youngest daughter and her family in Norway this Spring when we were talking about some of her new Swedish family’s idioms that she is learning.  Translating them into English can be more than mildly hilarious!  I took the liberty (a fun waste of time, actually) to look up a few from other cultures as well.  For example:

“Stop hanging spaghetti on them ears” is a Russian expression asking somebody to stop lying.

“I think my pig whistles” is a German exclamation of surprise.

And my daughter sends me this one with love from Sweden:

“Now you’ve gone and [defecated] in the blue cupboard”.  (I think that one needs no explanation, although I don’t know what the color of the cupboard has to do with anything…)

Of course, we have our own.  I personally like the one about not putting the cart before the horse: 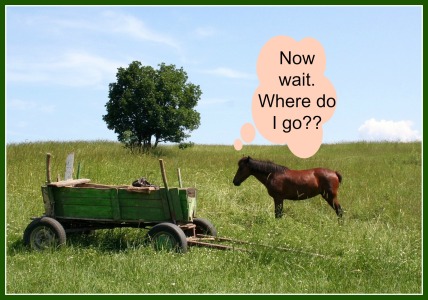 Which probably made more sense to my grandparents than to the middle-schoolers I serve now in the 21st century who rarely even see a horse, much less a horse-drawn cart.  Nonetheless, the wisdom remains, and, unfortunately, so does the human tendency to ignore it.

“In this way, you will set the Levites apart from the rest of the people of Israel, and the Levites will belong to me.”

See, first, there were sacrifices, blood and guts and a total mess that needed to happen.  It wasn’t pretty and it wasn’t cheap, but God said it was necessary to cleanse, consecrate (that’s a really good word study, BTW), and prepare his priests for the next step, which was~~

“After this, they may go into the Tabernacle to do their work, because you have purified them and presented them as a special offering.”

Now the priest could get to the real work of why they were made priest to begin with!  First the purification, THEN the service.

Hmm.  So why do we think we have to clean up our act before we come to God??  Why do we think we can work our way into God’s favor?  Clearly, we simply can’t clean up our own act; they couldn’t even do that in the Old Testament!  (That’s why they had to keep killing off all those poor cattle.) And Jesus came into our very messy world to die on a very excruciating cross to provide us with this purity of Relationship with God—FIRST.

In fact, that’s the horse part.  That redeemed Relationship is what provides the “horse-power” for every other service, every other sacrifice, and every other thing that goes into the cart that follows—BEHIND.

The interesting part of this Relationship is that purity doesn’t mean perfection, it means process.  Because the horse never comes by itself; no, it always comes with a cart.  Always.  In other words, there are no perfect Christians, only serving ones who are in process of becoming perfected in the service of their King.

Which means He’s not intimidated by what might be in your blue cupboard…or mine.

3 thoughts on “What’s in YOUR cupboard?”