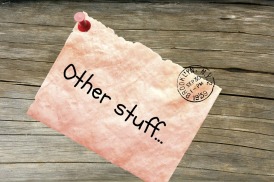 I never quite understood the whole streaking phenom from a few decades ago.  Chalk it up to cultural weirdness, although I’m sure the psychologists would have a few other differential diagnoses.  Or maybe it was just a fashion statement…?

Personally, I have three fashionista rules: cleanliness, comfort, and COVERAGE.  Really keen on that last one.

Anyway, here’s another one of those little obscure passages that leaves me scratching my noggin trying to figure out why God put it in the Bible.  This is right after Peter, James, and John kept falling asleep in the garden while Jesus was sweating blood praying about His imminent crucifixion.  Judas has now singled Jesus out, the guards have seized Him, and the rabble is following along:

“Then all his disciples deserted him and ran away. One young man following behind was clothed only in a long linen shirt. When the mob tried to grab him, he slipped out of his shirt and ran away naked.”

Was he a disciple wannabe? Maybe he had heard that Jesus was in the area, and jumped out of bed to see what they were doing, had thought about being a follower but just hadn’t worked up the courage. He was on the fence—not fully committed like the disciples (who had just fled, BTW), and like his clothes, didn’t have his spiritual armor on because he didn’t have any yet.  Thus he found himself in a somewhat compromising situation.

Half-hearted followers are easy targets.  Hanging on the fringes of God’s spiritual activity, they are curiosity/thrill-seekers or just haven’t made the decision to follow Jesus that results in “no turning back, no turning back.”  The susceptibility to also flirt with the mob allows for a spiritual gravitational pull that can easily strip them of what thin covering they may have and leaves them running spiritually naked—confused, battered, bereft—if they get away at all.

By contrast, disciples are commanded to “cloth yourselves with Christ”, and “the robe of righteousness” and “the full armor of God”, so that “having done all, stand.”

Flirting on the fringes of decision is not a good place to hang out.  The current pull of our society is strong; life calls for decisions, sometimes hard ones.  And the first and most important one, the one decision that will determine my response to everything else, is:

Because being a naked soldier is not a safe thing.