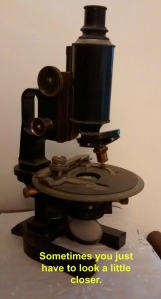 Acts 1: 6   So when the apostles were with Jesus, they kept asking him, “Lord, has the time come for you to free Israel and restore our kingdom?” 7   He replied, “The Father alone has the authority to set those dates and times, and they are not for you to know. 8   But you will receive power when the Holy Spirit comes upon you. And you will be my witnesses, telling people about me everywhere— in Jerusalem, throughout Judea, in Samaria, and to the ends of the earth.” *

I just love these guys.  Here they had walked with Jesus for three years, just witnessed the greatest turning point of human history in the Resurrection, and they’re still hung up on the restoration of Israel when God had something much bigger, broader, and encompassing for them.

Typical.  For all of us.  We get stuck on one mind set, one outcome, maybe even one failure (or series thereof…).  In doing so, we don’t merely put the God of the Universe in a box, but ourselves as well, because in reality, rarely does God use a period; it’s usually a comma.  In all of that, there are just some things that “are not for you to know.  But….”

The marriage failed, but……

The job was given to someone else, but….

He died of cancer despite our prayers, but….

Not only did the disciples NOT see the restoration of Israel, they actually saw the total destruction of the temple and the dispersion of their beloved country, family, and friends.  Even so, Jesus told them, God’s plan was bigger.  And full of power and plans they had not yet conceived of .  Same with us.  When things go sour, it’s easy to get discouraged.  However, that’s when we r-e-a-l-l-y need to listen to Jesus say–