At some point into King Saul’s tenure, things were not looking too good for the Hebrew nation, which, BTW, was nothing new up to that point in their embattled but miraculous history.   Come to think of it, it has been typical of their existence ever since.

The good news was that the prophet of the Lord, Samuel, the same guy who had in recent memory anointed Saul as king over God’s nation of Israel, said that his plan was to show up in town seven days hence, and that Saul was to wait for him there.  The bad news was that the very powerful enemy (one of several) was now r-e-a-l-l-y ticked off at the still-fledgling nation, and was mustering an army against them.  As might be expected, Saul’s men were getting more than a little nervous, and began breaking ranks, slipping away into the hills and surrounding places, which was understandably a bit disconcerting for the king of Israel, (who struggled with his own self-image issues anyway—can anyone relate?)

But wait!  There was even worse news!  Samuel, whose job it was to offer prayers and sacrifices to the God of Israel and bless them for success in battle, hadn’t shown up like he said he would!  He was late, or maybe he just wasn’t coming after all!

God’s sense of timing is not like ours.  To quote a good friend, Jon McKinney, “God is rarely early, but He’s never late.” This was a test, this was only a test. Unfortunately, Saul bombed it.

In fact, most of this life is a test as well.  In this episode, God was exposing an inherit flaw in Saul’s character—Saul was more concerned about himself, his safety, his victory and honor among the people (remember that old inferiority complex?) than he was about trusting God and honoring Him through patient obedience.  If only Saul had remembered his history lesson about his predecessor named Gideon (see earlier blog on that one, or better yet, read it in the Bible, Judges, chapter 7), he would have realized that God does not depend on numbers, but on our faith and His own grace and power.

And how do I respond when my circumstances are telling me that God is somehow late, or worse, that He is breaking His promise?  Part of our faith is demonstrated by how we interpret our circumstances in light of our relationship with God.  Part of our love for God is revealed by desiring to honor Him through our obedience in the midst of those circumstances.  It’s not about “my” victory, but about His ability; not “my” reputation, but His.

Remember the days of playing “Hide and Seek”?  (Yeah, I also remember “Red Rover, Red Rover”, potential broken bones and all, so let’s stick with “Hide and Seek”.)  I’m not sure if I ever actually won, probably not known as the most ingenious covert operative, but I might posit that most of us have become fairly adept in our daily lives at hiding our true selves in various ways, …even from our true selves!

One of the many things I love about the Bible is the complete candor and mirror-like reality of its stories.  The heroes (with the exception of only One) are nuanced and flawed, their follies and foibles paraded befor us not only to see, but to be related to.  And I do.  Heartily.  One such character is the first king of Israel, a fellow named Saul, described as tall, dark, and handsome (okay, that’s not me), but evidently with a supreme inferiority complex, (that’s where I fit in).  Here’s a young buck that God has chosen to be king, God’s prophet proclaims him to be king, and he even LOOKS like a king!

Pick up the story as the prophet, Samuel, comes to anoint him before the nation of Israel in a special ceremony:

Interestingly, earlier in the same chapter we are told that God gave Saul a “new heart”, which informs me that when God chooses me to accomplish something, he will also prepare me inwardly for that job.  However, it doesn’t just stop there.  That “new heart” must be nurtured and protected or else the weeds of old ways of thinking and outdated patterns of feeling or processing experiences will creep back in again.  That’s when I’m tempted to duck out of sight, so to speak, to hide myself from fear of past shame or failure.

The truth says the opposite.  As forgiven children of God, only when we step out from behind the baggage of our past can we then step into our full destiny, trusting His work in and through us whether that puts us in the spotlight or not.

In other words, since God, through His Son Jesus, has already come to seek us, we no longer have to hide. 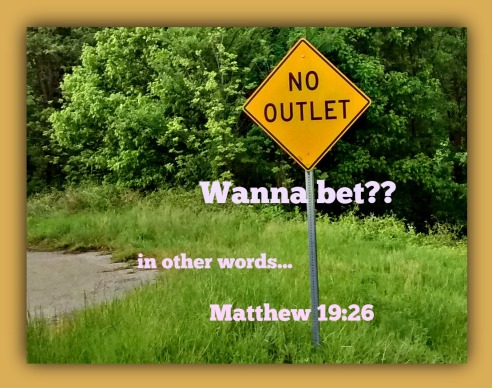 I recently had the chance to have dinner with a small group of amazing nonprofit leaders. Our host gave us all a gift by asking us to start the meal by going around the table and each sharing why we do this work.

Each member of the group was honest and open, and, in listening to story after story, I began to see that they were all essentially the same.

They were stories about role models, whether a mother or a grandfather, a teacher, a social worker, a friend.
Stories of seeing their own relative good fortune – because everybody is more fortunate than somebody.
Stories of the call to serve.
Stories of stubbornness in the face of the impossible.
Stories of discovering that their talents can be used for good.
Stories of getting hooked on the feeling of making meaningful change.
And stories of them fighting each day to…

In the few short months since I started this blogging adventure, I think I am ready to draw a few conclusions:

First, definitions: To follow traditionally meant—“to accept as a guide or leader; accept the authority of or give allegiance to;to conform to, comply with, or act in accordance with; obey; to imitate or copy; use as an exemplar:  (1)

The expanded version now reads: “When you follow a blog…the new posts from that site will appear in your Reader, where you can view the latest posts published across the blogs you follow. You’ll also receive notifications of new posts by email.” (2) 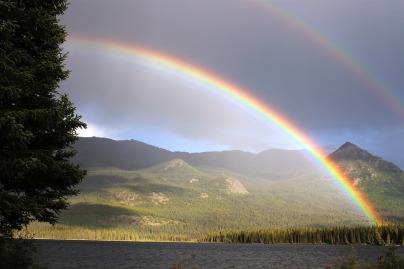 I had never seen a double rainbow until Bob and I were on our honeymoon (a L-O-N-G time ago), so obviously, double rainbows are kind of special to me personally.

One of the first things that the Bible records of God creating is light.  I’m not an engineer (both my dad and one of my brothers are, does that count??) but I think I remember a few things about light that are worth noting:

I find it intriguing that light was one of God’s first (recorded) ideas.  This gives me a clue as to its importance, not just in my daily walking around life, but as to my inward life as well.  Perhaps more so.  Probably more so.  No, definitely so.  Light—that is, understanding, clarity, wisdom—is integral to life.

As light was the first order of business in creation, so His light is of the highest necessity to me now, moment by moment, in each encounter and situation.  And eventually, even if I can’t (and usually don’t) answer all the questions now, when His light hits eternity, I’ll see that His rainbow was doing its work all the time.

A lot of folks in my small town can relate to this sign.  Never mind that the print is too small to read from the street.  You have to pretty much get your face right up to it to get the full impact of the words.   Of course the tip-off is the searing red color, which brings to mind things like a blaring fire engine, a tornado warning on the weather map, the burning flames of,…well, you get the idea.

It’s not a friendly sign.  But not uncivil, no, nor disrespectful.  Just matter-of-fact and to the point.  No beating around the brush (pardon the pun.)  It is from the local town government stating that your grass (to use the term lightly) is higher than the allowed limit for in-town residents.  The take home message is simply this: Cut it, or else.

Ah, therein lies the treasure!  Seems like the only motivator for some of us is the “or else” factor, a.k.a., consequences.  If…then.   And this is not necessarily a bad thing.  It is, many times, an uncomfortable one, which is in itself a good motivator.  I need to feel the pain if I lean up against a hot stove, or if I get irritable at my friend because I’m having a bad day.  I need to see the numbers on the scale go up if I eat donuts and ice cream every day, or the numbers in the grade book go down if I don’t study for my coursework.  Consequences teach us very important things, as well as keep us safe.

Removing reasonable (i.e. safe) consequences does the opposite.  Learning from our mistakes is harder, partly

because we don’t feel any different after making the mistake.   Or we don’t even know we made one, since somebody derails or blunts the consequence before it gets to us.  In a morally maturing sense, that’s “pass interference”, except that the one who pays the penalty is the person who was deprived of learning a needed lesson.

This sets everyone else up for a Domino Effect down the road.  Someone who is not well acquainted with the consequences of their own decisions and behavior will eventually have the rest of us reaping the benefit of their vested ignorance.

….it’s almost like they expect the city to make their signs a friendly pink and yellow.

Back on board this month with the Hobby Club.  This month is for the birds, literally.  The first week of May was to list 10 birds in our geographically area which we would like to identify.  Okay, so I cheated.  I already have identified several of these, including one of my all time favorite names, the “Yellow Bellied Sap Sucker”.  Now there’s a midwest moniker if ever there was one. (Just try saying that fast three times without spitting on someone…)

I might actually go for the badge on this one.  Yes, badges!  Totally yes! Specially designed badges just for the Hobby Club members. I still have my Girl Scout blood coursing through my veins, Geritol and all. The capstone will be to design and make our own birdfeeder, which will be a hoot, (pardon the pun), since power tools are not my best friend.  Doggone it, I’m gonna earn that bird badge!

But until then, I will content myself with just keeping the existing birdfeeders filled, and trying to snap those shots for my newly christened bird-watching field notebook (oooh, that sounds just so official!)  My husband and I enjoy this pasttime together, so much so that I bought him some field glasses a few years ago.  Here’s hoping I can get him in on the fun.  (He is NOT, however, sharing my badge!!)

Although I may reconsider, of course, if he finds the Yellow Bellied Sap Sucker….

Interested in Hobby Club??  Only $1 a month!  Check it out at:  tyler@hobbyclub.org