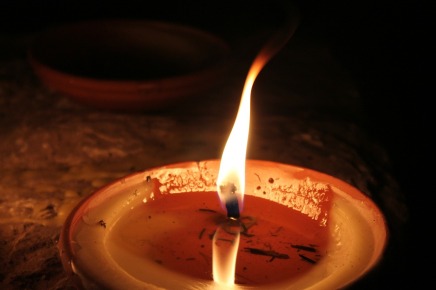 As I sat in the early morning darkness, I had lighted a citronella candle—one of my several strategies to prevent mosquito bites from occurring—when I observed a common moth drawn to the light of the flame.  Moths are so fragile and beautiful, and are so unaware of both their fragility and their beauty that they are vulnerable to flying too close to the flame…as this one did.  I looked down into the pot, and there he was, overpowered by the flame he was inexorably drawn to, and now I have a moth carcass stuck in the wax!

Again, I observed another moth flying playfully around the patio light.  Granted, there was no live flame to endanger him on this occasion, but I could see what he could not—a craftily woven spider web all but hidden and well within the range of the carelessly ignorant moth.  He was potential breakfast for this spider, and he had no idea.

We are quite credibly akin to moths; that is, our generation, our culture, and certainly all generations prior to us:

Something very calculated and sinister occurs when we are unable to get a grip on how God sees us in our very own uniqueness.  Likewise, we can predict a common response when we underestimate our weaknesses.  It is that we will eventually tend to give our attention, and indeed ourselves, to the world’s definitions and promises of success. In so doing, we fly perilously close to the web of deception and compromise, and to the flaming wax of consequence.

And invariably, we get stuck.